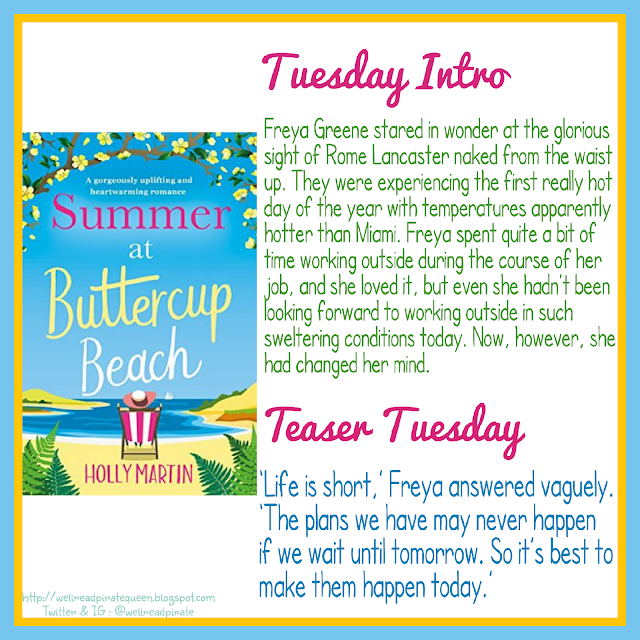 I know ... "First Chapter First Paragraph Tuesday Intros" from Bibliophile by the Sea is on vacation ... but I'm used to doing these two together so I'm just going to stick with it. "Teaser Tuesday" at The Purple Booker asks for a random line or two from anywhere in the book currently being read.

I started reading Summer at Buttercup Beach on my way in to work Monday night. I already knew the main characters somewhat, having had "met them" in Spring at Blueberry Bay. Roman's the brother of Bella, the heroine of Spring, and Freya's his best friend/employee at his glassworks shop. It was pretty clear in the last book that they were fighting feelings, because .... you know .... things are never simple.

I couldn't put this down once I started it (aside from getting my son ready for school). I carried my phone with me everywhere and even cut my post-work nap short so I could finish it and then try and find the right words for a good and proper review.

I can't do that, it seems, so instead I'm going to write an open letter of sorts to Holly.

Oh, my dear Holly Martin. I don't know how you always seem to know just what I need from a book. It's as though you've been teaming up somehow with my Kindle app and, I don't know, maybe my cat (I'm fairly certain he at least has his own Twitter or Tumblr).

You've somehow niggled your way into my very being.


Once again, you have delivered to me (via your brilliant publishers & NetGalley) a book that's hugged me close and let me snot all over its shirt (if a book wore clothing, that is) and whispered that everything really could work out in the end. You've made me shed an almost ridiculous amount of tears, followed by laughing until I snort beverages out of my nose, followed by more tears.

Once again, you have given me believable characters to love and root for. You've developed an amazing couple who are able to overcome past foibles and future fears to reach that happily ever after that seems so elusive at times. And even though we all know that it's where they'll end up, it isn't so contrived and cliched in its telling that is feels like you've just called it in.

So thank you, yet again, Holly. Every time I open one of your books my romantic sappy side grows a little bit stronger and my pessimistic side weakens. If you're ever in my area, I owe you a drink.

Another fun one for the beach! Coming across a lot of them today:)