The Daughters of Temperance Hobbs by Katherine Howe

I've been sitting on this beauty since early January thanks to Netgalley and Henry Holt & Company. Of course, it being the second in a series, first I had to read The Physick Book of Deliverance Dane (which you should, as well. The background information there really is important here even though it could be read on its own).
Then I had to recover.
Then life happened repeatedly and other books got added to the pile and I kept thinking "well, it's not set to be released until late June so there's plenty of time." All of a sudden the release date was rapidly approaching and I still hadn't cracked the digital spine. Based on my experience with the first book, I should have known that this wouldn't be an issue.
I started reading late on June 23rd. I read it while walking to and from work. I read it at work. I read it in bed. I read it when I was waiting for the coffee to brew and the food to cook.
I couldn't put it down.
Today is the release date and, quite sadly, I finished the book early this morning.
"Sadly" because I've grown so attached to the women in these books and I'm going to miss them. Sam and Arlo, too, but most definitely the women. Howe has a real talent of making her characters so very real and relatable -- whether she's writing about ten years ago or two hundred and ten years ago. I'm hoping that it doesn't take another ten years for a third book to appear. There's still so much story that could be told! 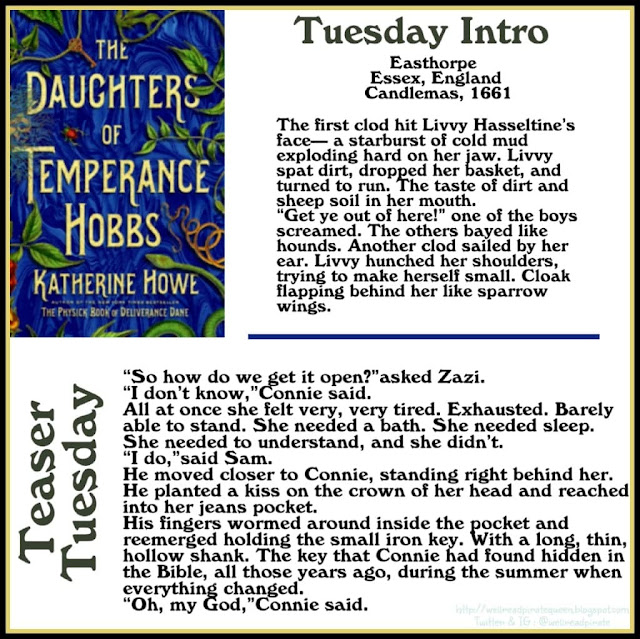 "First Chapter First Paragraph Tuesday Intros" is from the first paragraph or two of a book being read now (or in the future) and is hosted by I'd Rather Be At The Beach. "Teaser Tuesday" at The Purple Booker asks for a random line or two from anywhere in the book currently being read.
Posted by karen at 4:24 AM 3 comments:

Lisa Grunwald's Time After Time is part time travel fantasy, part boy-meets-girl love story, part love story to Manhattan. I found it fascinating at times (especially the love story to Manhattan bits), swoon-worthy on more than a few occasions, heartbreaking beyond belief, and incredibly frustrating for a whole slew of reasons.Unfortunately, none of these I can really get into without this turning into one giant spoiler. Well, I suppose the Manhattan bits might be safe if they didn't tie in so tightly to so many other aspects.
Rating this is hard. I suppose a 3.5 would work. The parts that I loved, I loved enthusiastically. The parts that I didn't would have had me throwing the book across the room had it not been on my phone. I will say, though, that I'm already thrilled that the movie rights have been acquired. We'll have to wait and see. 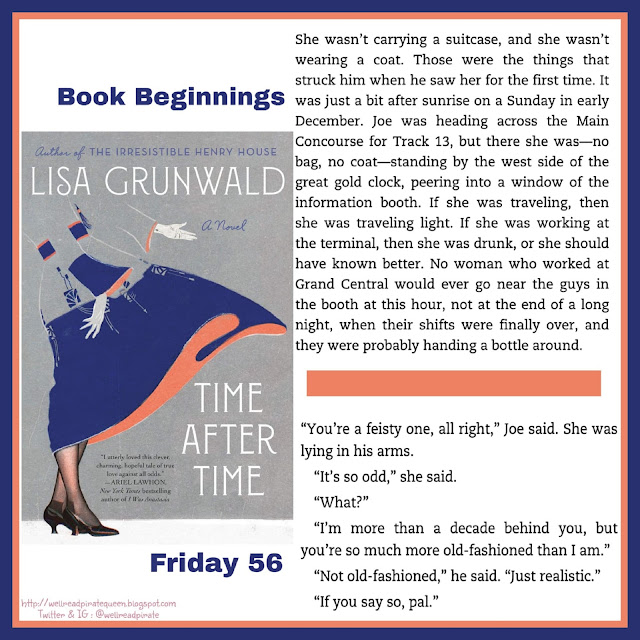 Friday 56 (today is 56% from the ebook) is hosted at Freda's Voice
& Book Beginnings (share the first few sentences) is at Rose City Reader.

Never Kiss a Notorious Marquess was another case of accidentally requesting on NetGalley the third book in a series without realizing it. I'm so awfully glad that the folks at Kensington approved the request because it made me get the first two books, fly through them, fall in love repeatedly, and add yet another author to the "must read" list.

The series in question is Renee Ann Miller's The Infamous Lords. It centers on a group of friends known for their scandalous ways (whether warranted or not) and the women who end up shaking things up in more ways than one. In Never Dare a Wicked Earl we had Hayden and Sophia. In Never Deceive a Viscount it was Emma and Simon. Now we get James and Caroline. Do yourself a big favor and read them in order. They're likely fine on their own, but they do go in order to some degree ... and from the bits and pieces seen of James in the first two, you'll be more than curious and ready to fall in love with him by the time you get to the third. 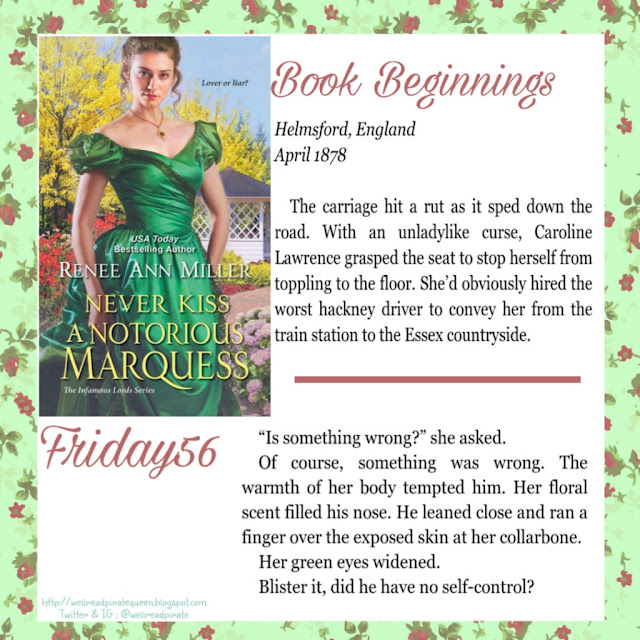 Friday 56 (today is 56% from the ebook) is hosted at Freda's Voice & Book Beginnings (share the first few sentences) is at Rose City Reader.