This book was so much freaking fun!
It's the story of Charlotte and Marcus. She's been granted the ability to change shape by a faerie godmother and he's an Earl with more than a few difficulties in life. Someone is out to ruin him (or maybe multiple someones are) and after his secretary is injured seeks a new one. Enter Charlotte, who has taken the form of a man named Christopher and applied for the job. Of course he gets it ... and of course she ends up falling for Marcus ... and of course she has to keep the truth of her ability a secret....ish.
It's part fairytale, part mystery, part romance and, as I've mentioned, so much freaking fun. I cracked up over Charlotte's naïvety and how she dealt with her new male bits ... swooned over the steamy bits (I know, right? I'm beginning to think that maybe I'm okay with the steamy stuff as long as it's pre-1900 .... and well-written) ... gasped over the violent bits. Amazingly, none of it was overdone so skimming was involved. I happily read every last word and will happily get my hands on anything else Emily Larkin has to offer! 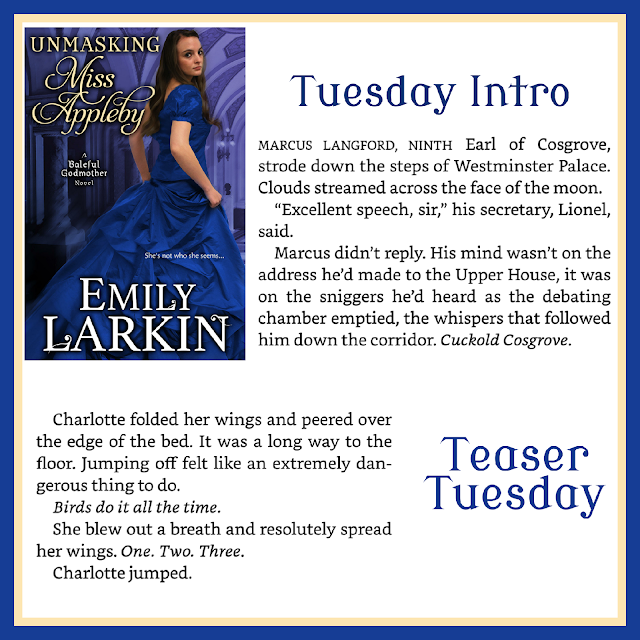 I know, I know ... "First Chapter First Paragraph Tuesday Intros" from Bibliophile by the Sea is on vacation ... but I'm used to doing these two together so I'm just going to stick with it. "Teaser Tuesday" at The Purple Booker asks for a random line or two from anywhere in the book currently being read.
Posted by karen at 3:48 AM

This book does sound like fun. I'll have to add it to my list. My teaser is from Indigo by Charlaine Harris and a host of others. Happy reading!

What fun! I love the beautiful cover, too. Thanks for sharing, and here's mine: “ALL THE BEST PEOPLE”

Sounds like a fun one. I'm curious who or what is Charlotte.

My TT from Passport To Murder

You're right Karen - this one sounds like great fun and although it isn't my normal kind of read - the fantasy element is very tempting, especially as it sounds like there is a fair dollop of humour. My TT this week - https://sjhigbee.wordpress.com/2017/06/13/teaser-tuesday-13th-june-2017/

This sounds like a book for me. Thank you for sharing!!
My teaser is from: King's Cage by Victoria Aveyard

I like both tease and intro. Going to check it out.