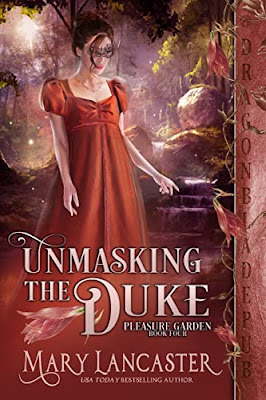 Love at first smile…Charmingly wicked, Johnny Winter has spent his adulthood drifting from scandal to scandal. However, inheriting the dukedom of Dearham has him considering his responsibilities, one of which is to right the wrong done to a distant cousin twenty years ago. His search takes him to Maida Pleasure Gardens, where he is distracted by an unusual and intriguing beauty.The first time Kitty saw the gentleman with the bone-melting smile, she lost her heart.When, more than a year later, she finally dances with him, the moment is spoiled by having to tie him up at gunpoint. For Kitty is the niece of the infamous Bill Renwick, who owns Maida Gardens and lives too close to the edges of the law. And Johnny has seen too much.So begins an impossible attraction – made all the more dangerous by the duke’s belief that she is his long-lost relation.Torn between the only family she knows and her longing for the duke, Kitty’s quandary is taken out of her hands by an attempt on her life. Learning to be a lady in the duke’s household brings further complications, not least her increasing obsession with her unconventional host, the man behind the mask he shows the world.The duke sees beyond the mystery of Kitty’s origins, but can she? And having finally found the love of his life, can he keep her safe and still find a way for them to be together? 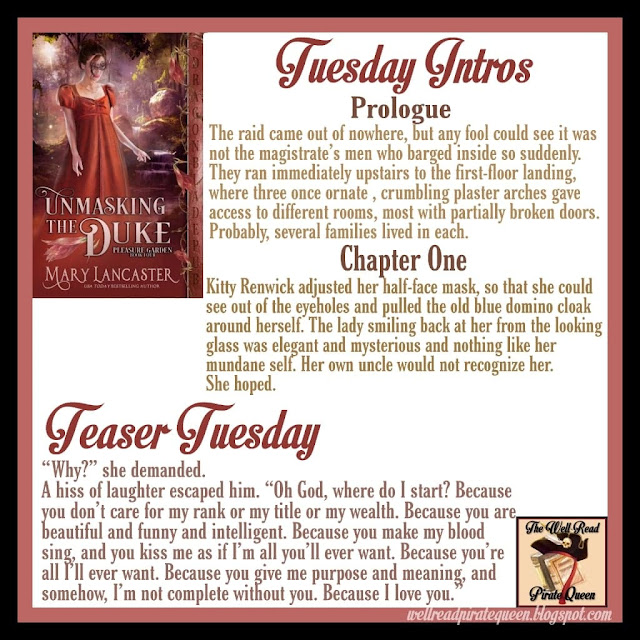 Over the weekend I flew through the first three books in Mary Lancaster's Pleasure Garden series ... and fell in love repeatedly with the main characters and more than a few of the secondary and background characters. The fifth book is apparently the last in the series so it is unlikely that I'll get to see Happily Ever Afters for all of those I've been hoping for ... but the fourth book, Unmasking the Duke, at least gives me a coupling that I didn't even know that I wanted with characters I've been reading about since the very first book.
Kitty Renwick is the adopted niece of Bill Renwick -- the owner of the Maida Pleasure Garden from which we get the series name. She works for her uncle but only during the day because he does not want her tarnished by the types of things that often happen at the garden after dark. She's intelligent and loyal and quite sheltered but she often sneaks out to the garden on ball nights. It is on one of these nights that she encounters Johnny Winter -- the man she has not been able to get out of her mind since the two of them crossed paths in the first book, Unmasking the Hero.
John Winter (aka Johnny ... aka Fish ... aka the Duke of Dearham ...) is a known rake who has rarely taken anything seriously. He is trying to change his ways and right some family wrongs now that he has inherited the dukedom. To do so he enlists the aid of a solicitor/investigator/friend/hero of Unmasking Sin, Ludovic Dunne.
[Are you beginning to understand why I say read them in order???]
They are searching for a distant cousin who was cut-off from the family years ago by Johnny's  now-deceased grandmother. He is lead to believe that Kitty may be the one. She is inclined to not want any part of it. The Renwicks are all she has ever had and cared about. She doesn't think that she would fit in with even the household staff much less the family. She doesn't think that she would even want to.

"Your Grace's world and ours do not mix," she said dryly.

"They do here at the Gardens," he pointed out. "Why not elsewhere?"

When Kitty is put into danger, it is decided that the safest place for her is with the Duke and his family ... at least until the threat is taken care of. The family is aware that Johnny believes Kitty might be "one of them" so they agree to keep her safe and treat her well and, just maybe, teach her about how to be a member of Society. It is all overwhelming, to say the least. Of course, the most overwhelming part is being in such close proximity to Johnny almost constantly.

Even though I don't read much historical fiction, this sounds good and the cover is really lovely.