My first book is set in Ireland and I couldn't resist it. It was first released in 2003 and I'm finding it difficult to fathom the fact that it's taken me this long to pick it up! Maybe the reasoning is because it's not exactly "cozy."  It is, however, beautifully written (at least the first 15% has been) and I'm extremely excited about some gloriously uninterrupted quality time with it this weekend!

The dazzling, award-winning debut in a series that delivers mystery, romance, suspense, and fascinating forensic detail.
When farmers cutting turf in an Irish peat bog make a grisly discovery—the perfectly preserved head of a young woman with long red hair—Irish archaeologist Cormac Maguire and American pathologist Nora Gavin must use cutting-edge techniques to preserve ancient evidence. Because the bog’s watery, acidic environment prevents decay, it’s difficult to tell how long the red-haired girl has been buried—two years, two centuries, or even much longer.
Who is she? The extraordinary find leads to even more disturbing puzzles. The red-haired girl is not the only enigma in this remote corner of Galway. Two years earlier, Mina Osborne, the wife of a local landowner, went for a walk with her young son and vanished without a trace. Could they, too, be hidden in the bog’s treacherous depths, only to be discovered centuries from now? Or did Hugh Osborne murder his family, as some villagers suspect? Bracklyn House, Osborne’s stately home, holds many secrets, and Nora and Cormac's inquiries threaten to expose them all.   (Description from Amazon) 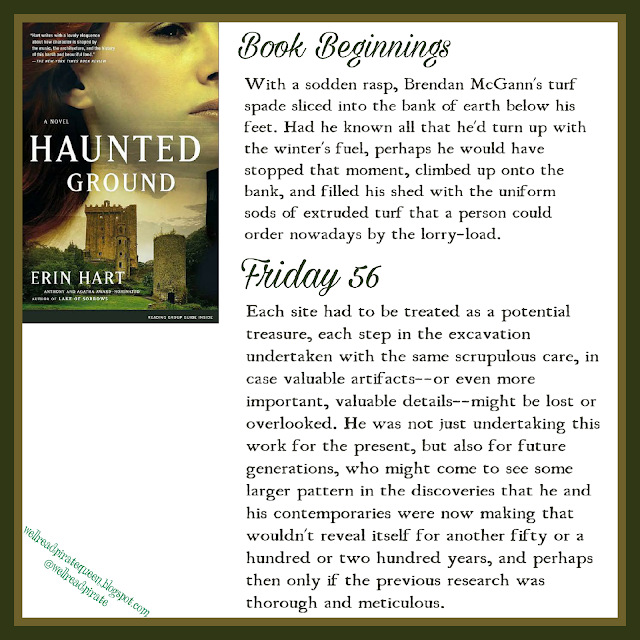 Friday 56 (today is 56% from the ebook) is hosted at Freda's Voice
& Book Beginnings (share the first few sentences) is at Rose City Reader.


Cormac Maguire is an Irish archaeologist and Nora Gavin is an Ireland-born American pathologist who have been called to research the finding of a "bog body." Actually, it's just a bog head. At first the locals wonder if it's related to any of the still-open missing persons cases involving women -- particularly the wife (and child) of the area's primarily landowner, Hugh Osborne. While studying and researching the mysteries surrounding the head, Cormac and Nora also begin to look into the mysteries surrounding Osborne's missing wife and child. Hart does a beautiful job with the back-and-forth of the two stories with local color and history giving each an added oomph (I especially loved the musical tie-ins and the elderly aunt.)So, I'm taking part in The Begorrathon where my goal is to read books either set in Ireland or written by Irish authors for the month of March. When I was trying to narrow down my TBR for the month I stumbled on the Nora Gavin series by Erin Hart and knew I would have to at least add the first one. I was originally going to put it off until later in the month, but decided that I need a break from feel-good romcoms and lighthearted cozy mysteries and this definitely fit the bill. I'm more than a bit of a history junkie. I love learning about the past -- the good, the bad and the dirty. Thanks to my dearly departed mom and her love of genealogy it's not unusual for me to get lost for hours in centuries-old letters and articles trying to learn more about people (whether "mine" or not). Add this to my love of mysteries and it's probably not surprising that I've been fascinated with forensic anthropology and archaeology for years (thanks, in large part, to Sharyn McCrumb -- whose books often include surnames found scattered throughout my family tree).My biggest complaint: even though it's dubbed "Nora Gavin #1," Haunted Ground has several main characters -- Cormac Maguire and Detective Garrett Devaney being the most prominent. For me, anyway, Nora was probably the least interesting of the three and probably would have knocked a full star off of my rating had it not been cancelled out by how much I loved the other two. [From the descriptions of the next installments in the series, though, it looks like we'll at least be seeing a lot more of Cormac and, possibly, another appearance of Devaney.]4 1/2 out of 5 stars
Posted by karen at 6:12 AM

Email ThisBlogThis!Share to TwitterShare to FacebookShare to Pinterest
Labels: A to Z, Book Beginnings, Erin Hart, Friday 56, The Begorrathon 2017

Sounds good. I've not heard of this book before. This week I am featuring Justice Calling by Annie Bellet. Happy reading!

I haven't heard of this one, but it sounds good. Thanks for sharing with us! I'd love for you and your readers to check out my BB and 56 . . . http://tinyurl.com/LisaKsBookReviewsRTD

This is new to me. I do wonder what they were finding.

Wow, this one does sound really interesting. Thanks for mentioning it. :-)

Love the setting in Ireland's peat bogs. That's enough to make me keep reading!
My Friday post features The Other Daughter.

Thanks for playing along on BBOF!

It's not cozy nor does it have a cutesy cover like most of yours has. ;) It sounds really good though! Hope you have a lot of fun reading all Irish for your challenge!

I've actually been getting a little burnt-out on all the happiness ;) I do have a couple of cozies & a couple of middle grade books lined up for the month, but I need some grit once in a while!

I like the idea of this one taking place in Ireland. Good opening and excerpt too.

My Friday 56 from Odds and Ends