A June of Ordinary Murders is the first book in Conor Brady's series featuring Detective Sergeant Joe Swallow. The story begins 17 June 1887 -- just a few days before Queen Victoria's Golden Jubilee. (At this point in history Ireland was still under British rule.) Swallow is called in to investigate after a man and child have been found murdered in a park and, while puzzling, he feels it to be just an "ordinary crime." Of course, the further he digs the less ordinary it is.

I started reading this Sunday night at work after accidentally leaving Black Rabbit Hall at home.  Right now I'm about a third of the way through and I'm enjoying it immensely. Brady has a very similar style as Charles Finch (in fact, Finch wrote a blurb for the book which almost never happens), and since I was just thinking to myself last week that I need to dive back into the Charles Lenox series this came as great timing to scratch that itch (which, you probably know, only makes it itch more). I've read and loved quite a lot of books based in and around London during this time period, but I believe this is my first set in Ireland (thanks, Begorrathon!). It definitely won't be my last. 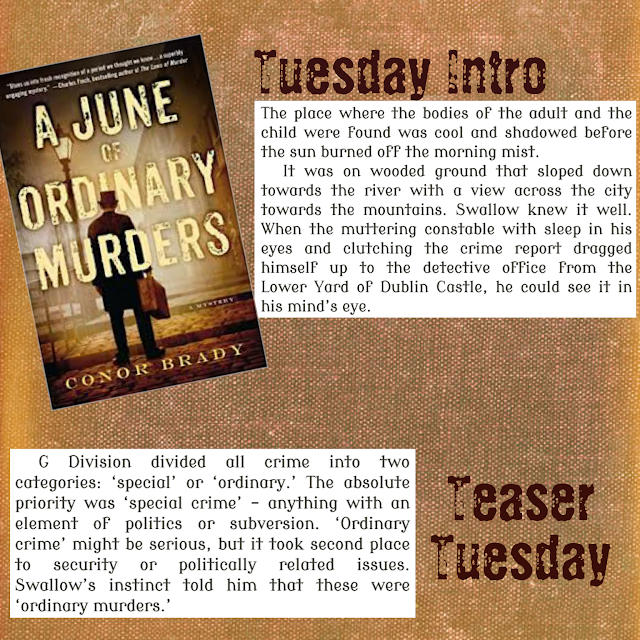 "First Chapter First Paragraph Tuesday Intros" is from the first paragraph or two of a book being read now (or in the future) and is hosted by Bibliophile by the Sea. "Teaser Tuesday" at The Purple Booker asks for a random line or two from anywhere in the book currently being read.

I like the opening! I'd keep going. I really liked Black Rabbit Hall.

I love the teaser quote! I'm guessing that at the time, this would have been the case, given the political situation. What a lovely ironic title - no wonder this one has swallowed you:). A great teaser, Karen and thank you for sharing. This is my TT this week - https://sjhigbee.wordpress.com/2017/03/21/teaser-tuesday-21st-march-2016/

Mine this week is from a Michael Connelly Harry Bosch police procedural: https://wp.me/p3Nz8P-1fv

I'm in! Thanks for sharing...and enjoy.

What a nice way to find a book by forgetting another. I like the sound of this and would keep reading.

I'd keep reading. It sounds interesting. My Teaser is from a Southern cozy mystery by Tonya Kappes.

I haven't read many books set in this time period, but this sounds like a good one.
My Tuesday post features The Boys in the Boat.

I love this time period, and a mystery too! I would definitely keep reading. I recently finished Ghostly Echoes by William Ritter and A Perilous Undertaking and am currently looking for a new book or series set in this era. Thanks so much for sharing!
Laura :)
My FPFC Tuesday

Great intro, I really want to read this one! :)

I'm always up for reading mysteries by authors I haven't read before. This sounds like a winner. Here's the link for my intro/teaser for today: http://wp.me/p4DMf0-1w6

I'm curious as I do love a good mystery.