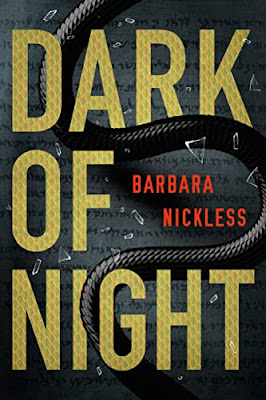 What an exotic way to die in Chicago.

When esteemed historian Elizabeth Lawrence is found in her car, killed by a cobra’s bite, only a brilliant professor of semiotics, Dr. Evan Wilding, can see the signs around her strange death. As he helps homicide detective Addie Bisset decipher the scene, the puzzles left behind offer Evan chilling passage into the mind of a killer.

Evan’s investigation merges with that of an Israeli agent, who claims Elizabeth was close to acquiring an invaluable artifact. She was also drawing the attention of unsavory treasure hunters, forgers, and thieves. Was someone desperate to expose the truth of Elizabeth’s astonishing discovery?

The deeper Evan and Addie delve into the case, the darker it gets. A murderer’s archaic crimes are just the beginning. In a race where there can be only one winner, the final victim might be Evan.

I was talking about Game of Thrones & House of the Dragon with a guest last week and our great mutual love for certain characters and actors and other things that they have done.
Them: "What's your favorite non-GoT Peter Dinklage role?"
Me: "Evan Wilding in At First Light."
Them: "Is that a movie? TV series? "
Me: "Neither. It's a book, but I can only picture him as the main character."
I pointed him in the proper direction of the blog post and the book itself and the next in line -- Dark of Night. He checked back in tonight with rave reviews of his own about the first and by the time he wakes up this morning the second should already be waiting on his Kindle. It's been on mine thanks to NetGalley since early June and I just started reading it a few days ago.
While Evan Wilding is still my favorite literary semiotics professor, so far this hasn't grabbed me the way the first book did. There hasn't been nearly enough Addie and Diana and I'm not overly enthralled with the addition of certain other characters ... and there are a lot of characters to try and keep track of this time. At least we get some good quality time with Diana's corgi, Perro. I'm only about a third of the way through right now but, so far, Perro has been a definite highlight in an otherwise "eh" read so far.
The "Intro" for today is from the Prologue-ish bit before the story begins. The "Teaser" is from 31%. We may see it again on Friday for Book Beginnings & Friday 56 and I'll give an update to the eh-ness if we do! Either way, I still highly recommend going back and reading the first book. 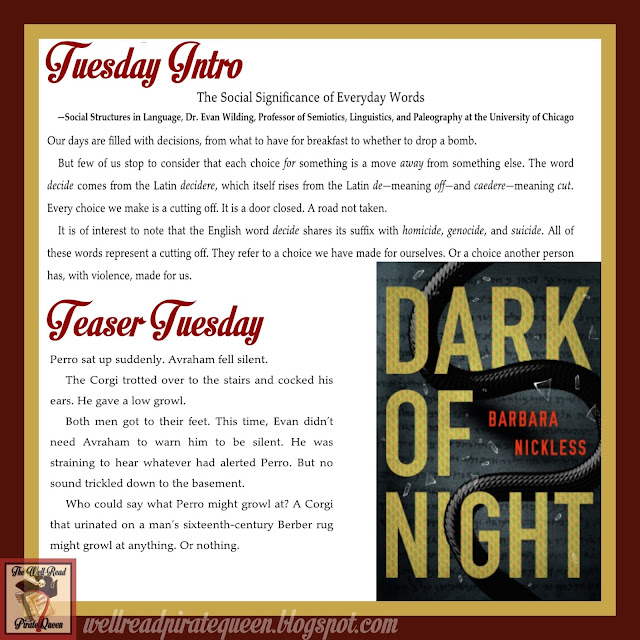 "First Chapter First Paragraph Tuesday Intros" is from the first paragraph or two
of a book being read now (or in the future) and is hosted by Socrates' Book Reviews.

"Teaser Tuesday" at The Purple Booker asks for a random line or two
from anywhere in the book currently being read.
Posted by Karen at 4:01 AM

This sounds like a good one. I'm finding many books to add to my TBR today.