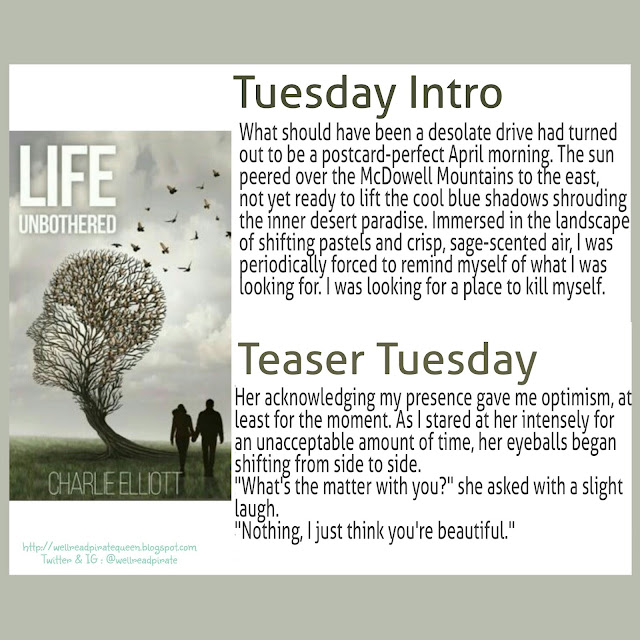 As per usual, "First Chapter First Paragraph Tuesday Intros" from Bibliophile by the Sea is on vacation ... but I'm used to doing these two together so I'm just going to stick with it. "Teaser Tuesday" at The Purple Booker asks for a random line or two from anywhere in the book currently being read. I know I have more than a line or two. Be impressed I didn't just screenshot the whole page to post.

I knew absolutely nothing about Charlie Elliott when I saw us both complaining on Twitter one day about Goodreads being down. I was just outright complaining while Charlie was lamenting the fact that he had a giveaway to set up for Life Unbothered. Smartass that I sometimes am (I know - you're shocked at that revelation), suggested that since Goodreads wasn't playing nicely he could just send the book to me directly and cut out the middle man. Shockingly (to me, anyway), he agreed.

Of course, my life being such as it is, it took me longer than I had hoped to start reading it and then longer still to actually find the time and mental oomph to stick with it. It's the story of Wade (and, later, of Wade and Sophia).He's depressed. He's got massive anxiety. Panic attacks are a normal thing for him. He shuts pretty much everyone away as often as possible.

Most of what he experiences and feels I just sat there nodding. "Yep ... that's totally what it can feel like." Amazingly, though, Elliott has written it in a way that hasn't triggered any of the feelings like books sometimes can. Either I'm getting a better grip or Charlie Elliott is some kind of magical being. Perhaps it's a little bit of both.

This is not a happy-go-lucky book. There's humor and romance and pain and heartache and so much realism that it's sometimes hard to read, but it's harder to put down.
Posted by karen at 4:31 AM