Today I'm sharing another book I likely wouldn't have known about had it not been for The Begorrathon and my quest for new-to-me Irish authors! Derek Landy is a Dubliner and, quite possibly, one of my new favorite people. As soon as I saw the writeup on Goodreads I knew it would be worth a shot to at least pick up the first of his books:

Stephanie's uncle Gordon is a writer of horror fiction. But when he dies and leaves her his estate, Stephanie learns that while he may have written horror, it certainly wasn't fiction. Pursued by evil forces intent on recovering a mysterious key, Stephanie finds help from an unusual source - the wisecracking skeleton of a dead wizard.

Once I saw the Amazon description I was absolutely sold:

I posted on Instagram about being excited about reading it and then once Rachel McMillan mentioned how much she loves them, I hopped onto ebay and bought all 9 paperbacks from the UK. They arrived Monday afternoon and I think John is already hoping that I'll fly through the first one so then he can borrow it to read.

Oh, yeah. They happen to be middle grade books. I happen to not care.

It's highly unusual for me to use two passages from early in a book for a Tuesday Intros/Teaser Tuesday post. For Skulduggery Pleasant (aka Scepter of the Ancients in the US), though, I feel I need to make the exception. The bit from page 48 when Stephanie discovers what Skulduggery looks like is just too good to not share! 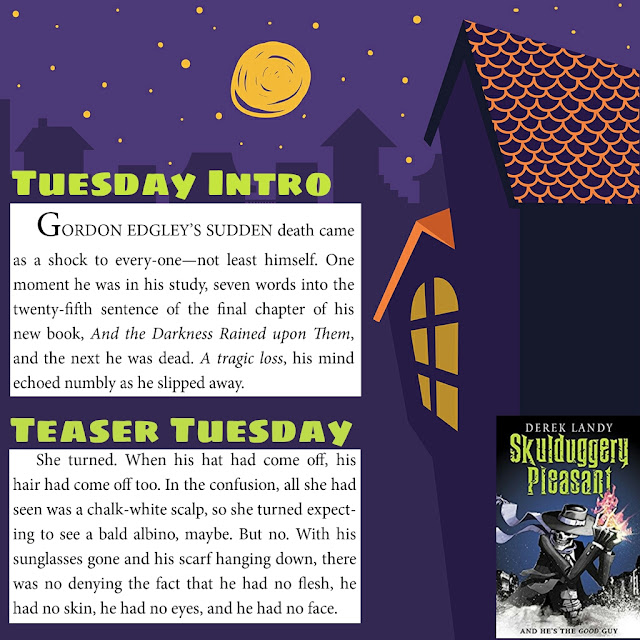 "First Chapter First Paragraph Tuesday Intros" is from the first paragraph or two of a book being read now (or in the future) and is hosted by Bibliophile by the Sea. "Teaser Tuesday" at The Purple Booker asks for a random line or two from anywhere in the book currently being read.
Posted by karen at 1:09 AM

Oh my, that got my attention. Yes, I'd keep reading.

Oh this sounds great fun! I'll be looking to see if they are on audible for my granddaughter. Thank you for sharing, Karen:). My TT this week is really interesting... https://sjhigbee.wordpress.com/2017/03/07/teaser-tuesday-7th-march-2016/

This sounds fun. I would definitely let my daughter read (in a few years!)

A good book is a good book no matter what. Love that cover and they sound like so much fun.
sherry @ fundinmental My TT

Oh, wow! What a discovery!

I love your colorful presentation. Thanks for sharing, and here's mine: “IT HAPPENS ALL THE TIME”

I love the sound of these! Funny teaser and it sounds like they will be perfect for you! I'll have to look for them.

Not sure this one is for me Karen, but it does sound fun.

Love the opening. Does sound like fun. Here's my link for today's intro and teaser: http://wp.me/p4DMf0-1v4

Ooh...Must have this! It sounds right up my alley:)

My TT from House Of Seven Days

I've been reading more "kid" books lately and enjoying them. This sounds like a fun story. Great graphics in today's post, too.
My Tuesday post features A Thread of Truth.

Okay okay, I now know I really need these...lol. :) Um actually I am pretty sure I have book one around this house somewhere...hmmm, might be time to go on a treasure hunt. ;)

I snorted over something on the bus in to work and totally thought to myself "Stormi SO needs to read this!"